Soba noodles topped with vegetables and drizzled with sweet and spicy sauce that is infused with sesame oil and garlic. Healthy but filled with lots of flavor!

A few years ago, when I first started college and was living on my own for the first time, I wanted to try something new, something different than the rice that I was used to at home. I had seen soba, or buckwheat noodles, at Japanese restaurants, but I’ve never had the chance to try them. Living in Davis, a large college town with mostly small locally owned businesses, there was only one Asian supermarket, a Korean store called Kim’s Mart. Luckily for me, they sold soba noodles. But I didn’t know how to cook them or how to eat them so I searched for recipes online. Then I played around with ingredients, substituting what I had with what was listed in several recipes, mixing and matching, until I came up with this recipe I now call my own.

If you’ve never had soba noodles before, you’ll notice that the noodles look different than most of what we’re used to. It’s a dark grey brown color. If you eat the noodles alone, you’ll note that the texture is a little grainy and the taste isn’t too appealing. But isn’t that the same with pastas? They don’t taste great alone, but with the right sauce, they’re delicious. It’s exactly the same with soba noodles. The sauce makes a huge difference because the noodles soak it up and takes on the flavor.

Why do I love this sauce? It’s sweet from the sugar; a little spicy from the crushed red pepper flakes; slightly nutty from the sesame oil; garlicky, for a lack of a better word, from the garlic; with a hint of sour from the lemon juice. It plays with your taste buds. What’s not to love?

First, make the sauce. If you make the sauce first, it will have time to steep and the flavors will be enhanced. In a skillet or a small pot, heat the water, sugar and salt. Stir while the sauce simmers until the sugar and salt dissolve. Now add in the minced garlic and red pepper flakes. Allow it to simmer for a minute or two before turning off the heat. Add in the sesame oil and lemon juice and stir to combine the ingredients. Don’t worry if the oil doesn’t mix with the water. Oil won’t mix with water. You just want to disperse it.  Allow the sauce to sit while you prepare everything else. 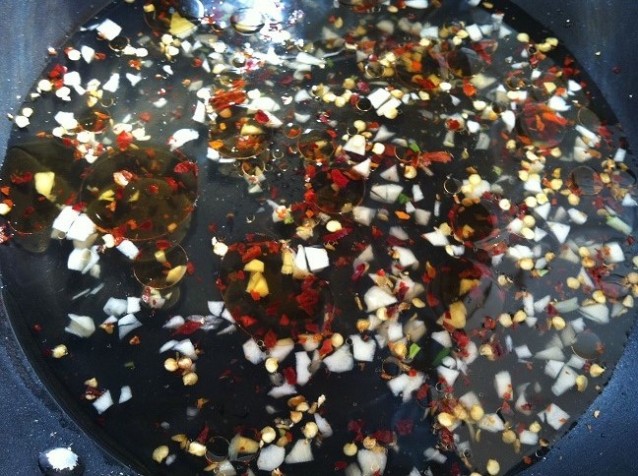 Next, boil the soba noodles. Soba noodles usually come in a large package and are individually wrapped in bundles. You’ll need about one bundle per person. Maybe more if the person eats a lot. You can use whatever brand you like. This is actually my favorite one because I feel the noodles don’t become too soft.

Boil as much noodles as you need. My recipe is for two with sauce leftover for at least another two portions. You can always make more veggies. I boiled these soba noodles for 5-6 minutes until they become tender. 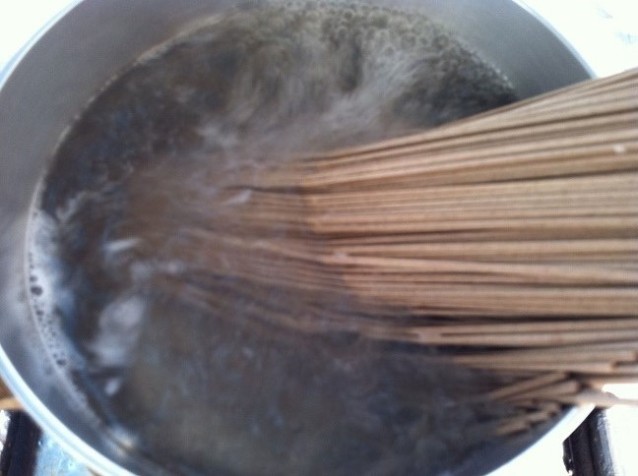 While the soba noodles are boiling, go ahead and prepare your vegetables. Wash your vegetables, then chop and dice them into small pieces. I chose to use yellow squash and string beans this time, but I usually use broccoli. You can use whatever vegetables you like. Add more than what I wrote on the recipe if you plan to make this dish for more people.

Add about a teaspoon of olive oil to a skillet over medium to low heat. Wait for the oil to warm before adding the vegetables. Be careful though. Any water added to hot oil will start popping. I added the green beans first because they take longer to cook. After about two minutes, I added the rest of the veggies and stirred.

Vegetables, especially mushrooms, contain water that will seep out when you’re cooking. However, if there is too much heat, sometimes it becomes too dry and the vegetables may start to burn. Go ahead and add 2-3 tablespoons of water to give the vegetables a little more moisture. Again, be careful when adding any type of water to oil.

To the vegetables, add about 2 tablespoons of soy sauce and more to taste. I also added a ½ teaspoon of red crushed peppers. But if you don’t like spicy, you can leave that out. Cook the vegetables until they become tender then turn off the heat and set aside. 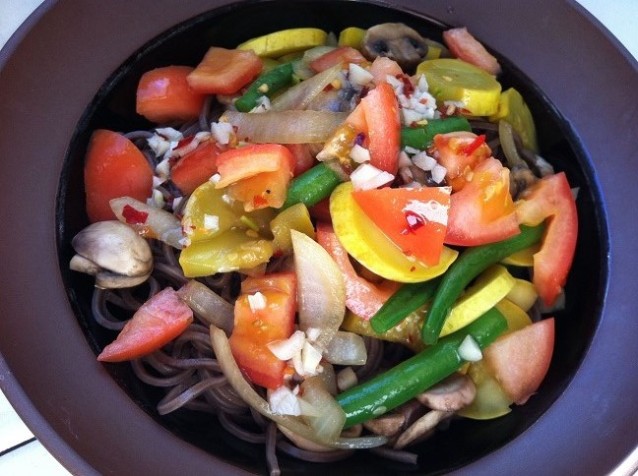 For a printer friendly version of this recipe, click here.

Click on the image below for an enlarged view of the recipe.

There was an error retrieving images from Instagram. An attempt will be remade in a few minutes.